The audacity of hope, and how to become immortal. 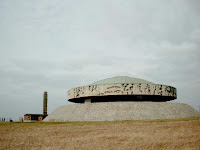 The title of this blog is Reflections on Majdanek, a reference to one of the most unbelievable moments I have ever experienced. Let me share this moment with you, and then offer some reflection on it.

Majdanek is the site of death incarnate. It is the home of despair. If there is a hell, it is one of its many manifestations on earth. I have visited three of these manifestations with the intention of finding Hell, many more without realizing what hell was; of them all, Majdanek stands out. It is a particularly dark place in hell.

Majdanek is the last place I cried.

Majdanek, pronounced My-donn-ick, is a Nazi concentration camp on the outskirts of Lublin, Poland. It is incredibly preserved, with few signs of destruction as the Soviets "liberated" the camp before the Nazis could destroy the camp and its many records. Lives were not as fortunate as the buildings that once housed them.

I was there at the end of June 2008 with my brother and many friends from across the vast country of Canada, all of teachers, all of us eager to learn. We had spent days in Poland and Germany, attending ceremonies, visiting Polish Jewish graveyards and memorials, entering the gates of death at Aushwitz-Birchenau. Walking until the rotated "B" of Arbeit Macht Frei - work will set you free.

If there is a hell, it has many manifestations on earth.

But Majdanek is where I cried.

Right next to the burning chambers of Majdanek, which could be once again functional in 24 hours, was the image at the top of this post. Only in three dimensions; it could be walked around, it could be scaled. If the rain fell, it could be smelt in a new way. This building is called the Mausoleum. In it are the remains - ashes, bones, skulls, teeth - of some of the camps more than 70,000 victims. It is located on the site of death; where, on 3 November 1943, 18,000 Jews were killed by their persecutors. This event was known as the Harvest Festival to the Germans, as Bloody Wednesday to all else. It was the largest, single-event of mass killings of the entire Holocaust.

Majdanek is where I cried. And where I sang, with friends, a Canadian folk song of hope.

A message of hope. A daring message of hope, at the site of death, in the heart of Hell. Where 18,000 single lives, stories, masses of experience, of knowledge, were ended. Audacious.

Here is my reflection - how dare I feel overwhelmed, lacking in hope, when the nations of Jews can encounter Hell and survive, and then call themselves, Israel, the "home of Hope." How pathetic of me. Self-serving, human.

Go read Halina Birenbaum's Hope is the Last to Die.
Posted by canadianhumility at 3:43 PM 1 comment: Links to this post