So I just spent 20 minutes doing the dishes in my new home. I am currently living in the village of Val Marie, Saskatchewan; my new home is shared with 3 other twenty-somethings working in Grasslands National Park. Which is also where I am working. Which means that, in this paragraph, I have essentially shared the completion of two of my life goals. One, to work in a Canadian National Park, has been a lifelong dream that I recall setting for myself at a very young age. The second, to live in smalltown Saskatchewan and experience the Saskatchewan cultural environment in a completely new kind of way, has been a recent goal of mine. Sounds like a good summer, no? 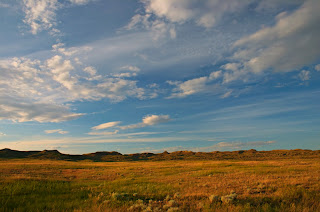 The only thing that I miss is being gay. Having those rare opportunities to talk about my sexuality – talk about my arousal. Share my interests and desires with people. To laugh rather than to hide.

It makes me wish that I didn’t love every moment of what I am doing out here – how I could imagine a small community like this being so absolutely fantastic if I felt that there was a potential for one to be gay in it.

But there isn’t. Not only do I not recognize any other gay people in town, but even if I had there would be no opportunity to really discuss it. Life is an act here – one misstep and you fall off the stage. That said, falling off of a stage is a pretty fun event… and so I am resolving not to hide my sexuality here, but just recognize that it isn’t a topic of discussion or lifestyle meant to be on display.

Seriously, I feel like I have been transported to October of 2009.

But, just as I am being transported back into the closet, let us celebrate those events that are far more significant for the international gay community and socio-political change taking place. In one part of the world, two men have been released from their cages and in another dozens of men walked down a street declaring their pride for the first time. Once again, my own life is humbled by the events that are taking place around the world.

Regarding the latter – dozens of men walking a street and publicly declaring their pride for the first time. For the past couple months I have been considering moving to Russia to learn the language and do some historical studies into the Soviet Era. Somehow I managed to meet somebody online (I always feel foolish saying this, for some reason) who is from a region in Russia. He is gay, and so he has told me a great deal about the challenges of being gay in Russia. So, as a result of my academic interest and my personal connection with the Russian gay environment, I have been paying some degree of attention to what little news I can find from the country. And this time, it is rather good news.

For the first time ever, gay Russian men were able to avoid a police ban on their Pride Parade and secretly walk down a street for ten minutes before dispersing to avoid police raids on the event. The event took place in Moscow, the capital of the country, and the centre of the strongest pressures for and against the advancement of equality between the various sexualities of the Russian people. This pride, though short lived, is reason for celebration. Click here to see some images and read some testimonials from those involved in this event, and here to read an article written about this exciting event by the news agency Reuters.

Regarding the former – two men engaged to each other in Malawi who had been arrested in the December of 2009; Steven Monjeza, 26, and Tiwonge Chimbalanga, 20, were arrested after celebrating their engagement ahead of a wedding planned for 2010. In Mid-May they were convicted of gross indecency and unnatural acts because of their attraction to and love for each other.

On May 31st a presidential pardon was granted largely as a result of international political pressures from governments of the west, including governments who have not thus far granted gay men and women the right to marry. It is no surprise to many that Africa remains one of the regions of the world where homophobia is found at its most extremes – for months now an international campaign has been fighting homophobic legislation in Uganda that would make it illegal both to perform homosexual acts as well as to fail to report homosexuality in friends, family and neighbours. It is exciting to see that international pressure is working in defending the rights of the people, even if many of these successes are accomplished as a result of power politics – where the powers of aid can be suspended if African governments refuse to cooperate with the wealthy nations of the West.

It must be noted that neither of these exciting events have been completely free of challenges, and, despite their successes, both also manage to highlight the challenges faced internationally by the homosexual community. For example, in Malawi, Patricia Kaliati, Malawi's Minister of Gender and Children, said Monjeza and Chimbalanga's release did not mean they could continue their relationship – and indeed, they have been forewarned that if they were to continue their “activities” it is possible that they will be rearrested and reconvicted, with the pardon no longer being an effective means of protection. Indeed, the President Mutharika of Malawi, who said he was pardoning the pair on humanitarian grounds, also mentioned that, "In all aspects of reasoning, in all aspects of human understanding, these two gay boys were wrong - totally wrong.”

In Moscow, the pride parade that took place at the end of May was successful only because it took place. It was not sanctioned by the government – in fact, the Mayor of Moscow, knowing that it was taking place, sent policemen out in advance to ensure that it didn’t take place. It was considered an illegal protest by all levels of government – a sentiment shared by an estimated 80% of the Russian people. It was only by misleading Moscow’s police with misinformation as to the location and providing some diversions that the group was able to converge, collect the media for coverage, march for 10 minutes with their home-made banner, and then disperse into the homes and businesses that dotted their route before the police arrived to violently break up the peaceful protest. The organizers have noted that it is unlikely that such tactics will work in the coming years, and that their only hope for continuing successful protests lies in the European Human Rights courts and their interest in supporting Gay Russians.

Russia, it seems, is lost in the 70s – in the pre-Stonewall era. Malawi stuck in an era long even longer forgotten.

These events also serve to act as a foil to the Canadian environment. In the town that I now live in, a village of a mere 110 people, it does not surprise me that I will find it difficult being completely comfortable in my sexuality. And yet, if I were to get engaged my greatest concern would be social chastisement – not imprisonment. Moreover, in mid-June, I can walk the streets of Regina proud of who I am, in a parade recognized by the government and sponsored by some of my elected ministers. Walking back into the closet, as painful and challenging as it may be, does not deny me the rights that I have become accustomed to feeling – rights that don’t exist elsewhere.

Once again, I am humbled and grateful for my Canadian life.
Posted by canadianhumility at 6:51 AM 3 comments: Links to this post