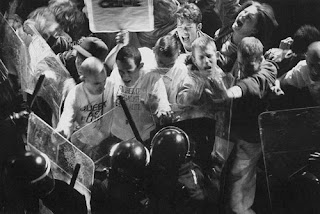 What does it mean to have Gay Pride?

Over the past couple of days, many of my friends who blog have been writing responses to this question in light of the recent postings for Straight Pride by the Tea Party (that right-winged collection of tax and health-care opposing individuals in the states).

Months ago, as one of my first blog entries, I wrote about an interview with Hugh Jackman that I had read, in which he stated that sexuality is such a small part of our being, and that to be restricted to one's sexuality as the single defining aspect of one's being is quite unfortunate.

And I agreed with him back then. And I agree with him now. I am so much more than gay, in the same way that many of my friends are so much more than straight. The fact that many of my straight friends have had to fight to discover their identity just as I have (though, I would argue whether or not they have had to fight to preserve it in the same way that many homosexuals have) points to this fact. Our sexuality is nothing.

And yet... it is everything.

I have one friend, to whom I came out months ago, who said that I needed to stop using the term gay as the one that best defines myself. I never quite understood this response, but it remains his concern. I haven't any idea where this criticism is coming from, but it is rather hurtful. I remain an admittedly fragile person while telling people that I am gay - I have not yet adopted the idea that people are going to have to just live with it (even though I have to live with the fact that so many people are straight).

And so this question of Gay Pride is an important one for me to consider. Daily. As I try and discern how it is that I now exist, as an out-gay man, in a society that doesn't understand me but is willing to mostly tolerate me. As long as I'm not holding hands in public, or kissing my boyfriend in a playground while surrounded by children.

Do I shout my sexuality from the hilltops? Be militant about it? Do I turn every issue into an issue of gender? Do I push people to come out themselves, just so that the gay cause can advance?

My Gay Pride is about me finally accepting everything about myself and being willing to share it with the world that I live in. And learning that the response that I get is of infinitely less importance than my willingness to experience love in a way that I have never felt it before.

I read this on a blog recently. It was a comment left behind.

"Being gay is the most important feature of my life for two reasons. Two very important reasons. It is how I love. And it is who I love.

Fundamentally, I am gay. I am so much more than gay, but gay nonetheless. It determines who I love, and how I am transformed by that love. A lot of me is not dependent on me being gay, but a lot of me is.
Posted by canadianhumility at 10:13 AM 1 comment: Links to this post