Earlier this week, the Saskatchewan Court of Appeal upheld a ruling of the lower courts, saying that marriage commissioners could not use their own personal bias as a means of determining who it is that they marry. In effect, they could not refuse marriage to anybody, regardless of sexual orientation, skin colour, or other feature. It is their duty as representatives and employees of the government to provide marriage to those that choose not to have a religious ceremony. 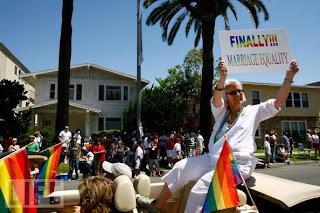 As such, the individual rights of the commissioners are superseded by the rights of the marrying couple. It is now unlawful to deny one's services based on conscience or religious ideals.

I imagine this is a cause for celebration for many.

Both were ruled unconstitutional. (though perhaps not entirely unacceptable?)

Maurice Vellacott, a Member of Parliament and the Conservative Party, and an outspoken opponent to same-sex marriage: “The Court has hereby belittled religious faith or any faith for that matter. It sets up a hierarchy of rights saying these same-sex rights are more important than freedom of conscience and religion.”

Is that really what the court did?
Posted by canadianhumility at 11:34 AM 2 comments: