Cows and their Wranglers. 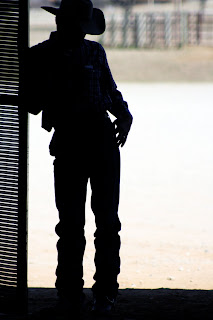 He walked slowly, with that classic cowboy strut that you find so mesmerizing and masculine but is just awkward enough that you are certain it is the gait that develops from spending 20 years riding a horse and slowly twisting and turning the shape of your hip bones so that they can get a more secure grip on the quadruped’s back. It is just barely unattractive.

His shirt was striped. Opposing forces of deep purple and an ocean-spray of blue. A dress shirt that was sorely being misused as a work shirt. He rarely wears these shirts when he isn’t working – I could tell he was just coming into town quickly. In fact I’ve only ever seen him in t-shirts – the bane of the male body; they never display everything that is going on just quite as well as a dress shirt does.

The T-shirt is like the speaker at a protest that tells all the facts and nothing more. The Dress Shirt tells all the facts, makes you understand why their important, has a little bit of charm and a heavy dosage of sex, and makes you fall in love. (On a side note, I really should start wearing dress shirts more often).

His brow was still sweating. It’s been really hot outside for a couple of days.

In this case, the third.

I saw hair on the chest of a man whom I only allowed myself to think of as a post-pubescent but hairless child. I judged him by his level of maturity – a poor standard as he is a stellar man, but the standard I have decided to use. Besides, he couldn’t grow facial hair if he really tried – how am I to imagine that he has hair on his chest? (How am I supposed to stop imagining where else he might have hair and the different mazes and shapes that the collected mass of each strand forms?)

He leaned in. I could feel my groin tingling with sensation. Stop.

“Oh, that’s the truck that he usually drives out there.”

His name is Brock.

As he walked away his slightly deformed gait was all the more attractive – and yet, not free of criticism. (Besides, he could much more easily wrap his legs around me than he could around an 800 pound stallion.)

I need to find a man to dance with.
Posted by canadianhumility at 4:19 PM 1 comment:

The Rural Municipality of Prison and other Townships

So Val Marie has put me in a position that I would wish upon nobody.

I love this town - I love my job. I love that every evening I get to see an incredible sunset, or I can go for a bike ride through a well-protected and advancing National Park. I can go for a hike through the park and discover new wildflowers, new terrain, and new wildlife. When you work for a park with over 15 endangered animal species and another 30 endangered plants, you always, always get the sense that you may just find something that has been seen for a very long time.

I've found cairns, arrowheads, dinosaur bones - things that have not been known of for many thousands or millions of years. This is just part of my job. A fantastical day at the office.

I've not been able to sleep for the past couple of nights though. And there is no good reason to be offered except for an intense fear that has been a whispering memory for the past year but that choked the vitality out of my life in the twenty odd years that existed before that.

I am afraid of being myself in Val Marie. This stairway to heaven is creaking a bit too much - I'm uneasy here. I'm hiding in masks that I didn't know I had anymore.

The casual bigotry, homophobia, hatred that suffocates me is expressed in that most-vile of all weapons - humour. I am not the only victim; I should be thankful that I am not Metis or Indian. But it is very casual - just as I remember it being in high school.

The place in which I find myself is a prison of open prairie. Its as though I was released from my fear, my hatred of the world, my refusal to be myself for a short period and then reminded of the reality of my environment. I've pushed myself back into my cell. Closed the door. Locked it - hidden the key in Regina.

I knew this was going to happen. I just had no idea it was going to hurt this much. I don't even remember what its like to talk about men. The vocabulary is lost.

Last night I texted a friend of mine in Halifax, asking her to remind me that it was ok to be gay. It surprised me that I was silently crying in my bed - courteous and selfish enough to not want to wake my ever-present roommates.